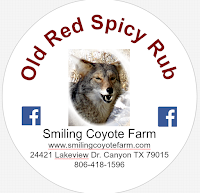 Black cumin, found in Smiling Coyote Farm’s “Old #18 Chili Mix” and “Old Red Spicy Rub, is unfamiliar territory for many of us. Most couldn’t describe or identify its flavor, and many misunderstand what the spice itself is.

Black cumin—called “kala jeera” in India--is not Nigella sativa (kalonji) although, in appearance, they do resemble one another. However, in flavor they differ.

Nigella, a spice we use in Panch Phoron, is ancient (found in King Tut's tomb), and could be a good subject for a post of its own. Erroneously called onion seeds, black cumin, black caraway or fennel flower, Nigella's qualities are often described as oregano-like with herbaceous notes, a slight bitterness, and a warm, toasted-onion flavor. Quite unlike black or brown cumin, nigella is in a class of its own.

Black cumin is a less pungent relative of brown cumin with a significantly different flavor profile. Black cumin has a sweeter, lemony, caraway-like flavor. While not as commonly used as its brown cousin, the use of black cumin is prevalent in eastern India, North Africa, and Middle Eastern countries in curries, breads, and chutneys.

Brown cumin (jeera) is the variety most people in this country know, It's one of the most frequently used spices in the world as well as one of the most aromatic. We use it in six of our blends and rubs.

Pungent and earthy, bittersweet with hints of citrus and pine, brown cumin’s slight bitterness dissipates when toasted and its flavor profile varies among the three major growing regions. India provides most of the world's brown cumin and is the most familiar one.

In this country, brown cumin is closely associated with Tex-Mex and Mexican dishes, but its use is even more ubiquitous in North African and Indian cooking and in its area of origin, the eastern Mediterranean.

Black cumin, brown cumin, and nigella: All three spices have a role to play in our cuisine and all three are significantly different.